We welcome pastor John Porter as our Interim Pastor.  John received his Masters of Divinity degree from Columbia Theological Seminary in Decatur GA in 1996, and was called to serve as the Associate Pastor of Hill Presbyterian Church in July of that year.  His experience with a Senior Pastor transition at Hill Church as the Associate Pastor ignited a respect and passion for intentional transitional ministry.  After 12 years of service at Hill he responded to God’s call to transitional ministry.  He has served 7 congregations as Interim Pastor since that time facilitating the process of preparing and searching for a new installed pastor. 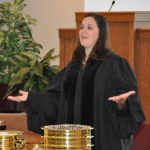 Nadine Roy, or Dena as she prefers to be called, joined the CCUPC staff in January of 2007 as the Assistant to the Pastor. In April of 2010 she was ordained as Minister of Word and Sacrament and installed to the Associate Pastor position. Rev. Roy has been a Western PA girl all of her life. She grew up in Bridgeville, just south of Pittsburgh, where she was a member of Bethany Presbyterian church. Dena attended Grove City College, graduating with a Bachelor of Arts degree in Christian Thought. After college Dena enrolled at the Pittsburgh Theological Seminary, where she earned her Masters of Divinity Degree. During this time Dena served a congregation in Crafton, PA.Dena’s husband, Brooks, has lived in Cranberry Township since the spring of 2004, and Dena joined him here in the fall of 2005 after they were married. Brooks owns and operates a computer consulting company in near-by Warrendale, PA. Dena and Brooks have a 3 children and share their home with two cats, Gigabyte and Terabyte, and some fish.  It constantly amazes Dena to see God’s grace at work in the members here at CCUPC and throughout the world, and she feels honored that God has allowed her to be a part of it.